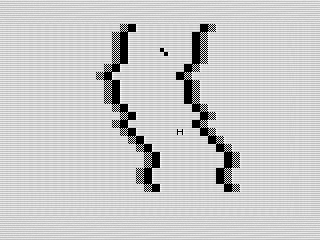 Dodging games were the rage back in the early ’80s. Wanting to add my own take on the genre, I created Stick Shift, November’s program of the month. The goal is simple. Dodge other cars, oil spills and spikes while not crashing into the wall. Mess up? Well, it’s game over for you. Don’t fret though, it isn't that hard—yet.

Shift and dodge.
The game play is pretty simple. Using the arrow keys, you move (5 & 8) and shift (6 & 7), make your way through each stage for extra points. If you do, the course gets narrower, making the dodging harder.

You start the game in low gear. Shift up to speed things up. It’s not much, but enough to notice. As things get tight, you can shift down to the slower speed. Note that you won’t get any points when moving slower. So, use it when it helps, but speed up again when you can.

Also note that you can drive over the edge of the track before the side wall. There is a catch though as you won’t get any points, or worse. If you are in low gear, you’ll lose a point. This game play is unusual for my programs, but makes sense in a driving game.

Those obstacles seem well spaced.
Code wise, Stick Shift works as a pair of loops. The outer loop acts as the the stage counter. The inner loop acts as the obstacle counter and will shrink as the game progresses. This makes the course more littered as you progress. It also shortens each stage.

As noted, you can shift speed up or down. Line 300 does this by setting a variable with some time consuming math. As I’ve noted before, you can slow down the ZX81 using its SIN, COS and other complex math functions. To make the code shorter, I also used the ZX81’s unique PI constant.

The rest of the code is interesting as well, but I won’t go into details. I’ve talked about the various techniques in the past. There are a few places I could change, but won’t. The program is great as is.

That’s a wrap.
And there you have November’s program of the month. A great little game that is fun with a good amount of difficulty.

Originally published at www.reids4fun.com on November 24, 2016.