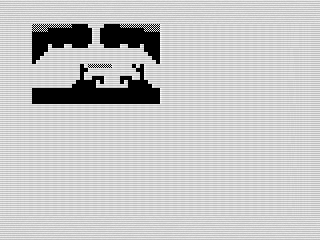 Sorry, still no Joust. It’s not where I want it and I’ve spent July working on my novel instead. That isn't to say that I’m going to leave July without a program of the month. Instead I’ve pulled from my original site to bring you one of my favorite programs, Block £ Spear. In this game you'll find yourself at the wrong end of a knight’s spear. Fortunately, you have a shield and can easily deflect the spear by using the “Z” and “.” keys to raise or lower your shield. Sounds easy? You might be surprised.

Block £ Spear still is one of my favorite programs. It is deceptively simple, but horribly unfair. There is logic to the lance’s movement, but as the game progresses the lance will move almost every turn, even right before you are hit. By that point, you basically have a 50% chance of survival each turn. It wouldn’t take much to make the game more fair, but remember that I wrote this program in the early eighties. Not many games were fair back then, including mine. Unfairness aside, this really isn’t what I like about it.

What I like is the overall polish of the program. The program has a theme. It has knights, horses and a garish curtain to tie it together. The elements are easily identifiable and fit well with each other. Even better, there is a wonderful animation of you falling off your horse when you die. Which is probably a good thing since you'll die often. Block £ Spear is, for me, a good representation of a BASIC program. It has a simple mechanic, a tight theme, and good, if difficult, execution.

Aside from the difficult play mechanics, I’m not inclined to change much. It is a relic of my past, yet something I’m still proud of. The only changes I made were to make it run automatically and to loop upon death. I’m sure most ZX81 enthusiasts know how to run a program, hit "R" if you aren't. I, however, quickly found it tedious to run the program time I died. This version of Block £ Spear removes that tedium. A small change to an otherwise perfect program.