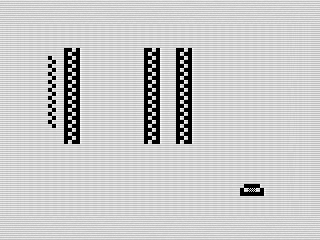 Pole Dodge is April’s Program of the Month and it is an odd one. Partially odd because I typed it in back in February, and partly because the program just doesn't play well. I know that doesn't lend well for one to give it a try, but try it you should. Why? Because the premise isn't bad. It is the execution that leaves a bit to be desired. Of course, I blame the slow hardware.

Okay, that isn't fair. Pole Dodge is meant to be just what it says. You maneuver your craft of dubious origins around poles that are moving towards you. Here is where I believe the premise is good. I was trying to create a 3D effect back in the early Eighties when 3D was being done with vector graphics or animation. Obviously on a ZX81, the effect is rather muted. I don’t see the Unreal or Quake engines running on this old hardware, although that would make for a great April's fool joke. Humm...okay back to reality. The 3D effect, sadly, isn't very prominent as the poles are printed, then you move, then the poles are printed again. This is way too slow to really show the effect and is why I believe the game falls flat.

I did allow the player to decide how much pain they’d deal with by selecting how long to play and the number of poles to display. I was probably thinking this would act as a difficulty setting. It doesn’t really work for two reasons. One, the game is way to slow making it obvious where the poles will be. Second, you can't select more than four poles. Go on, try to select more than four and see what happens. It doesn't help that the poles overlap, not at the start, but as they get closer they tend to print over each other. This spoils the effect and the lack of ground just makes it worse.

So why did I subject you to this program and, even worse, make it a program of the month? Well, one has to learn from doing things wrong. The program is pretty short and for the life of me, I couldn't remember what the program did before I typed it in. Considering these were the first programs I wrote, it isn't surprising to find lemons. However, in every lemon there is lemonade. Although the code doesn't add anything new, it does encompass a lot of ideas and algorithms in one place. Poles that change over time, use of data structures to store each pole, loops galore, various input routines, moving graphics, etc. Perhaps not a fun game, but there is still good stuff buried in there. And in many ways, the fun is in revisiting these programs and looking at all the ways I could have made these programs better. And maybe I still will.