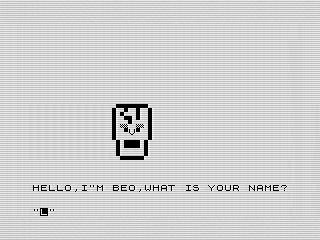 I was searching through my stack of programs and decided to choose a short and sweet program for June. Beo One is definitively short, clocking at just 33 lines of code. Well 35 if you include the two new save and run lines I added. This is a simple talking head graphic program, which is the sweet part.

The mouth animation is actually pretty simple. It moves the mouth if the character code is greater than 28, which is pretty much any letter. I think I was trying to keep the mouth from moving on spaces. All in all, it is fast and works. The scrolling text isn't new, a simple character string that is shifted as each letter is spoken.

I was trying to limit the speech to a single line. That is why it says to speak a line of up to 32 symbols. It really shouldn't matter. I could easily have placed the entered text in another string and done a pop on it and pushed the charter to the other string. That is the bad thing about looking at old programs. I keep thinking about ways to change them. Case in point, I modified the sentences a tiny bit from the original to make it fit better. Oh well, what programmer doesn't keep tweaking!

Well, that is it for June. Enjoy!